Some research has already been done investigating Web-based social networks and its applicability for different tasks such as trust inferrencing with trust networks or collaborative filtering respectively recommender systems. My master student Reto Hodel applied social network analysis to a social network and used the metrics to predict item ratings.

For this purpose, he built a very nice looking Web-based location recommender system called spotting. In this application, people get many locations presented on a geographical map that is based on Google Maps. The meaning of the encoded locations is very intuitive. The size of the location determines the level of match between the person’s preferences and the location. The bigger the location is presented the more relevant it is.

To boost the process of social network developing, we decided to build uppon an existing social network. Thus, we can rely on a already existent social network that has developed the relations among people already. For this reason, we decided to use the Web-based social network of Facebook because it provides a useful API, the Facebook API. Instead of developing a Facebook app, we decided to develop a stand-alone application that uses the Facebook Connect provided by Facebook. Facebook Connect is a function that a person can use to login to a different Web page with his Facebook account information. With this function it is still possible to gather his public information from Facebook, such as personal information and friends.
The value respectively usefulness of a collaborative recommender system increases with the amount of people and ratings. Therefore, the theory of network externalities respectively network effects applies to such systems. Thus, attracting people to use and rate the application in the first place is crucial.

Besides the social network and API’s that are provided by Facebook and others, Facebook also provides the facility of publishing news on the person’s wall that is seen by his friends. We used this function to publish location ratings and attract his friends to use spotting too. Our experience showed, that even with relying on a existing and developed social network it needs a lot of marketing to attract people. People do not just use an application because their friends use it. In general, no general approach exists to overcome this problem. First attempts try to reduce the so-called cold-start problem that describes the situation where only few ratings exist. But this is just one part of the solution. 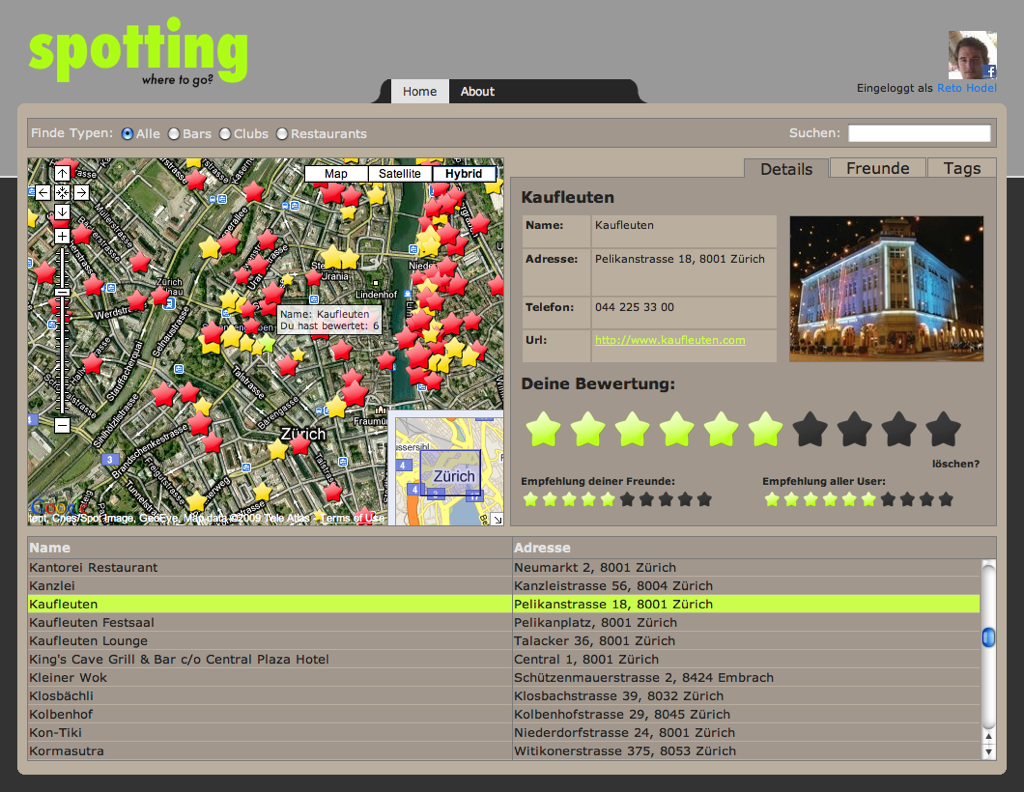 Anyhow, we could get 139 people in 3 weeks. Their ratings were the basis of our analysis. We analyzed the metrics of trendsetter, cliques, friend chains and some others. Unfortunately, we could not show that one social network metric leads to more accurate rating predictions. In contrast, the location’s average rating has been shown to perform better or at least equal to the social network graph patterns that we have investigated. In addition, the average rating is very cheap to compute! We applied the Friedman test that gave us evidence that some significantly performance difference exist on the significance level of 5%. Therefore, we run the Wilcoxon rank test. On the given significance level, we could not determine one single approach that is better then all the other. Of cause, we applied the Bonferroni correction for the family-wise error. The predictions based on trendsetters have been shown to be worst.
But these results have to be taken with caution. Despite applying statistical tests, the data set it self has some major threats to validity. The social networks consists mainly of the personal social network of the master student. That means that the average rating consisted mainly of his friends’ ratings. This fact highly influenced the performance of all other social network patterns.
However, I think that the experiment shows that the simple concept of wisdom of crowds respectively average rating is a simple but effective approach to provide ratings. Further, the average rating has the highest item coverage since patterns such as cliques, trendsetters, etc. do not give that much information about that many items.

To conclude, social network patterns may provide valuable information to generate more accurate recommendations, but not in general. The high computational costs of computing social network metrics should be taken into account because some of them are NP-hard.
However, other researchers investigated more positive results. But their evaluations should be read rather carefully. Sometimes, they tweak the experimental setting by defining weak hypotheses and unit of analysis to favour the social networks.

Thus, just be careful when people sell their work on social networks and be aware of the structure of the social network itself, that influences highly the experimental results. For instance, not all Facebook friends are real friends in Real-life.

Generating accurate recommendations for items, such as locations, movies or books, is challenging. Common Web-based recommender systems require information about the users’ past to generate suitable recommendations for them. In this thesis we first present spotting.li, a location recommender system based on Facebook, which allows users to rate locations and generates recommendations inferred by their friends’ ratings.
In doing so, we examine requirments to successfully implement such a system using the latest web technologies (i.e., Grails) and describe key elements of our approach. Our focus is put on performance and providing an easy-to-use interface incorporating Google Maps. Furthermore, we analyse different recommendation approaches which leverage structural information from a social network to predict ratings. In particular, we examine the use of social network patterns, such as cliques and trendsetters, as well as direct friends and two levels of indirect friends.
We finally conduct an extensive evaluation of these approaches, based on real data collected during the time of the thesis. To prove our findings, we test our dataset, based on 139 users, for statistical significance. We demonstrate that even a simple algorithm, such as the average rating, bares similar results to more elaborate algorithms.